In the end, Cristiano Ronaldo had his hands on the trophy even if it was not the way the ultimate showman had intended. Portugal, the team that finished third in their group, had found a way even on a night when their greatest footballer was taken off on a stretcher. The players of France were on their knees and suddenly it was a sunrise of a smile on Ronaldo’s face, in stark contrast to the devastation that had been seen earlier in the night. 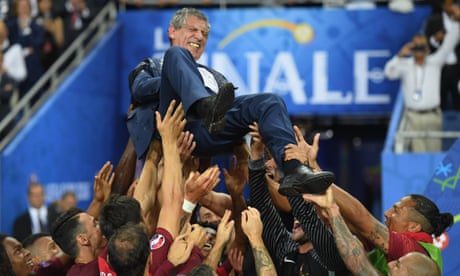 ‘We were simple as doves, wise as serpents’: Portugal toast Euro 2016 win

Has any player been through as many contrasting emotions in the space of a major final? Ronaldo was in tears when he left the pitch with his damaged knee in the first half. He had tried desperately to carry on and when he finally accepted it was futile it felt like a grievous setback to Portugal’s hopes of denying France the outcome that would have meant so much in this city. Ronaldo looked broken. The final was deprived of its main attraction and at that stage it was tempting to wonder whether his team-mates truly believed they could cope.

Portugal subsequently played like a team affronted by the suggestion they might be overly reliant on one man. They gave everything to keep out France during the long passages when the host nation put them under pressure.

Their sense of adventure grew as the game wore on and, ultimately, Éder’s decisive goal in the second period of extra time won a test of endurance. Their run of 10 successive defeats to France, stretching back to 1978, was over and Ronaldo, his leg heavily strapped, climbed the steps to collect the silverware – an excruciating low, an exhilarating high and a night like few others.

Portugal can duly reflect on their greatest ever victory, made all the more remarkable by the fact they could not beat Iceland, Hungary or Austria in the group stages. Their safety-first tactics will not appeal to everyone but nobody could dispute their competitive courage and mental toughness after the jarring challenge that meant their three-times Ballon d’Or winner was unable to influence the game in the way he would have imagined.

Match 28; The Day of De Villiers

Match 26; Tewatia and Parag Saved the Game for RR